Human milk oligosaccharides (HMOs) may provide the ‘missing link’ explaining the benefits breast feeding confers in asthma prevention, suggest Canadian researchers. The effect, postulate Meghan Azad and colleagues, from the University of Manitoba, Winnipeg, is delivered through the ability of HMOs to boost the gut microbiome (bacteria) that in turn influences the  immune system’s perinatal programming of asthma. “Evidence supports the existence of a ‘critical period’ during which the gut microbiota shapes the infant immune landscape and thus susceptibility to asthma later in life,” they write in a  review in Frontiers in Pediatrics.[1]

Asthma, a life-long chronic inflammatory air way disease, represents one of the most common chronic health problems. It is a non-communicable disease that affects nearly 440 million people worldwide,[2]  and furthermore represents the leading paediatric  cause of morbidity, affecting around one in seven school aged children.[3,4]  Asthma, a condition generally originating early in life, is  characterized by recurrent attacks of breathlessness and wheezing. During attacks, the lining of the bronchial tubes swells, causing the airways to narrow thereby reducing flow of air in and out of the lungs. While common, it should never be forgotten that asthma can be fatal. In 2016, the Global Burden Disease Collaboration estimated that 420,000 people worldwide died from asthma amounting to more than 1000 deaths per day.2 But asthma deaths represent ‘the tip of the iceberg’ with respect to the burden of this disease.  In the US alone, the annual cost of asthma has been estimated at $56 billion, with a significant proportion of this expenditure compromising indirect costs, such as days lost from work or school.

Asthma is a complex multifactorial disorder whose aetiology has been attributed to interactions between genetic susceptibility, host factors and environmental exposure, including nutrition, infection and allergic sensitization.[5] While treatments are available for asthma, such as bronchodilators that open swollen airways and corticosteroids that reduce inflammation, there is no long-term cure. No one would argue that rather than treating asthma symptoms it would be far better to prevent the condition from developing in the first place. Growing evidence suggests that asthma prevention should be addressed early in life.

Evidence for links between breast feeding and asthma

The developmental origins of health and disease (DOHaD) hypothesis, first outlined in 1990 by  David Barker, from the University of Southampton, proposed that during critical periods of early life nutritional and environmental exposure has the ability to affect adult diseases, such as obesity, hypertension, diabetes and asthma.[6] Breast feeding is a factor encountered early in life that has been demonstrated to relate to asthma susceptibility.  Generally, breast feeding is considered to protect against asthma, although some studies have produced conflicting results. In the Canadian Healthy Infant Longitudinal Development (CHILD) study, a prospective longitudinal cohort following nearly 3,500 families across Canada from pregnancy through early childhood, investigators led by Azad, found breast feeding confers protection against wheezing in the first year of life.[7] The protection was dose-dependent, with wheezing reduced by 62% with exclusive breast feeding and 37% with partial breastfeeding. In a second study, utilizing the same CHILD cohort,  Azad and colleagues found that by three years of age, infants who had been exclusively breast fed had lower risk of developing asthma than those fed with breast milk and some expressed milk, breast milk and formula, and formula alone.[8] 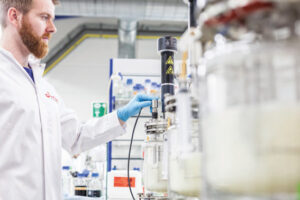 The view of breast milk protecting against asthma is supported by a meta-analysis of 117 studies conducted between 1983 and 2012 showing  breastfeeding to be associated with a 22% reduced risk of asthma, with the strongest effects observed during early childhood.[9] However, the beneficial effect was less clear in the UK Biobank study, involving over 500,000 subjects, which showed breast feeding was protective for non-atopic asthma, but not for atopic asthma.[10] Furthermore, other studies have  revealed that breast feeding had no effect on asthma,[11]  or  even that breast feeding represents a risk factor for asthma in later childhood and adulthood.[12]

Meghan Azad suggests a number of possible explanations for these conflicting  findings, including different ways of describing breast feeding, such as  ‘exclusive, full, predominant or partial breast feeding’ making it difficult to compare results across studies. “Without information on the exclusivity and duration of breast feeding, it is not possible to examine ‘dose effects’, which are helpful in assessing causality,” writes Azad.[13] Furthermore, ‘reverse causality’, where outcomes precede and cause changes in exposure, offers another reason for inconsistency. In the case of asthma and breast feeding, she suggests, mothers who notice early signs of asthma in babies may be motivated to extend breastfeeding, thereby masking the protective effect, or even resulting in false negative associations.

Theories proposed  to account for how breast feeding protects against asthma include breast feeding affecting epigenetic programming through DNA methylation (addition of methyl groups to DNA),[14] and the physical effects of suckling resulting in increased lung capacity and airflow.[15] But the prime candidate for asthma protection is the effect that breast milk has on the development of a healthy gut microbiota. Breast milk both provides the probiotic bacteria (with studies showing that it contains as many as 600 different bacterial species)[16] and HMOs which are prebiotic non-digestible carbohydrates whichenable selection for  beneficial bacteria.

Human milk oligosaccharides (HMOs) represent the third most plentiful ingredient in human milk after lactose (a different type of sugar) and fats. While more than 150 different HMOs have been identified so far,[17,18] their composition follows a basic blueprint connecting five building blocks  (glucose, galactose, N-acetyl glucosamine, fucose, and sialic acid) which are put together  in a variety of different  linkage patterns, that may be linear or branched and occur in different isomeric forms.[19]

Each mother produces a unique signature of HMOs, with the most extreme variations due to whether the woman is a ‘secretor’ producing the 2/FUT2 gene encoding the enzyme a-1,2 fucosyltransferase that adds fucose to oligosaccharide chains in alpha-1,2-linkages. The result is such mothers have high 2’fucosyllactose (2’FU) content in milk; while mothers lacking the enzyme (known as non-secretors) have no or much lower levels.

While intuitively HMOs should provide a rich energy source, the reality is that human infants do not possess the enzymes required to digest them. The result is that HMOs pass through the stomach and small intestine undigested, reaching the large intestine where they shape the intestinal microbiota of babies through providing a food source for just a few of the hundreds of bacterial species composing the intestinal microbiota, mainly Bacteroides and Bifidobacterium.  Direct evidence for this comes from a study showing that as the number of Bifidobacterium increases the amount of HMOs in faeces decrease.[20] Overall, the effect of HMOs on the gut microbiota is to stimulate growth of beneficial bacteria, while keeping harmful bacteria in check.[19]

Additionally, HMOs may indirectly influence composition of the gut microbiota through ‘decoy ‘activity, where they have structural homology to cell surface glycans, preventing bacteria from binding to the intestinal epithelium.[21] It is also possible that HMOs could have a direct effect on the lungs since approximately 1 percent of HMOs are absorbed into the peripheral circulation, opening the way for HMOs to influence infant microbial communities at body sites other than the gut, including airways and the nasopharyngeal cavity.[22]

Role of the gut microbiota in development of asthma

Evidence is growing that gut microbiota provide the connection between different HMO profiles, and development of the immune system regulating protection against allergies, including asthma.

In 1989, David Strachan proposed the ‘hygiene hypothesis’, exploring how lack of microbial exposure during childhood results in perturbations in gut microbiota and aberrant immune responses to innocuous antigens later in life, causing conditions such as asthma.[23]  One study showed that  children who develop asthma have lower total gut microbiota diversity than children who do not develop asthma at both one week and one month of age.[24]

At birth,  the immune system is dominated by the T-helper cell type 2 (Th2) which as the child develops shifts to the Th1 and Th 17 phenotypes.[25,26]  In early infancy delays to this transition (Th2 to Th1) have been associated with increased risk of developing atopic disorders, including asthma.[27]  In separate studies it has been demonstrated that the microbiota stimulates regulatory T cells that help monitor the Th1/ Th2 balance.]28 ,29 ] “Thus, early life microbiota disruption could lead to alterations in several immune parameters including regulatory T cells proliferation, Th17 response  all of which contribute to asthma development,” writes Azad.[1]

Evidence for link between HMOs and asthma

To date, the strongest evidence for links between HMO composition in human milk and allergy comes from research undertaken using the CHILD cohort. Here, breast milk samples taken from 421 mothers three to four months after birth were analysed for HMO content by Lars Bode, from the University of California, San Diego, La Jolla, and the infants given skin prick tests at one year of age to check for sensitization to common allergens, including certain foods. Results showed that  59 of the infants (14 % ) displayed sensitization to one or more food allergens, and that while no individual HMO was associated with food sensitization, the overall profile of HMOs appeared to play a role.[30] “Our research has identified a ‘beneficial’ HMO profile that was associated with a lower rate of food sensitization in children at one year,” said Bode in a press release published at the time. “To our knowledge, this is the largest study to examine the association of HMOs and allergy development in infants, and the first to evaluate overall HMO profiles.”

Next, Azad and Bode plan to use Bode’s analytical platform to undertake prospective studies exploring asthma diagnoses and infant feeding exposures including the influence of different HMO compositions of milk on the subsequent development of asthma.

Ultimately, if studies can identify the HMO profile protecting against asthma, this opens the way to prevent asthma from developing in the first place. But until recently, benefits of HMOs were limited to breastfed babies because it was not possible to source HMOs elsewhere for inclusion in formula milk. However, the German company

Jennewein Biotechnologies GmbH  has developed a unique HMO production process based on bacterial fermentation, allowing industrial-scale synthesis of a range of HMOs, including
2‘-Fucosyllactose, 3-Fucosyllactose, 3‘-Sialyllactose, 6‘-Sialyllactose, Lacto-N-tetraose, Lacto-N-neotetraose and Lacto-N-triose II. Such industrial production of HMOs offers opportunities to manufacture protective HMOs in large quantities and add them to formula. Additionally, since mothers produce  unique  profiles of HMOs  this creates the possibility to test their milk to see whether it contains the protective profile, and if not supplement their milk with the missing HMOs. In future, such innovations offer the possiblity to make asthma prevention a reality.