Molson Coors Beverage Company’s Burton Brewery has welcomed the delivery of a new high-speed filler for its canning line, marking one of the significant improvements to the site as part of a £25m investment from the company.

The filler has travelled from Bad Kreuznach, Germany, completing its journey to the Molson Coors Burton Brewery under police escort on Friday, 10th December.

The high-speed filler weighs in at over 24.5 tonnes, with a diameter of around 5.2m and will fill up to 2,000 cans of beer per minute when fully installed in early 2022. It marks a key element of Molson Coors’ multi-million-pound investment to upgrade the site’s beer and cider packaging facilities.

It has been designed and built to allow Molson Coors’ to utilise the latest sustainable packaging types, including the ability to transition to lightweight cans, improving both the operational efficiency and sustainability of the canning line.

The new addition to the Burton brewery comes as Molson Coors is also installing a new hard seltzer canning line at the site to produce its hard seltzer brand Three Fold.

Fraser Thomson, Operations Director of Molson Coors Beverage Company in Western Europe, said: “It’s great to see this significant piece of machinery arrive at the Burton brewery after making its way through the streets of Burton upon Trent. The new high-speed filler is a great bit of kit and will help us continue to drive efficiencies in our operations and help us towards our sustainability goals.

“We’re really proud to operate our biggest brewery in Burton and with this new equipment we are continuing to cement the town’s role as the home of British brewing and the wider drinks industry.”

Through its ongoing modernisation programme, Molson Coors has invested more than £100m in its Burton brewery over the past decade, where the company employs more than 1,000 people. As part of this, the brewery has been almost entirely self-sufficient in CO2 production since 2018, the equivalent of removing more than 2,300 tonnes of emissions from its operations, sends no waste to landfill and is now powered with 100% renewable electricity, as are all of Molson Coors’ UK operations. 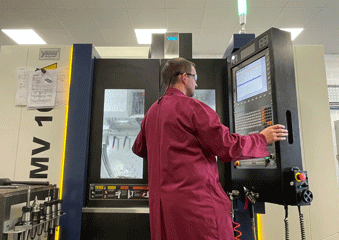