A project developing healthier foods based on the slower release of energy is set to expand its range of products. Using the latest scientific knowledge of how different types of starch are digested, the project hopes to introduce consumer-focused starchy products that can contribute to consumer’s health and reduce the risk of developing diet-related disease.

The EIT Food project “Sustained energy release starchy food products” has bought together PepsiCo with the Quadram Institute and KU Leuven to use innovative technologies, novel food processing techniques and new ingredients to develop foods which can contribute to consumers’ health, by optimising the presence of slowly digested starch (SDS) in product formulation. EIT Food is the world’s largest Agrifood Innovation Ecosystem supported by the European Institute of Innovation and Technology (EIT).

With 10-25% of the adult population of the European Union being obese, and 10% with Type II diabetes, there has been a lot of focus on supporting consumers to eat more nutritious foods. One way of doing this is to reformulate foods, in particular carbohydrate-rich foods. This is because it is not purely the overall calorific value of foods that defines their impact on health, but also the rate at which they are digested and that those calories are released.

Highly digestible food products, especially starchy foods, are of concern as they may be digested so rapidly that their metabolic effect is comparable to that of free sugars, resulting in blood glucose peaks and the rapid release of insulin, which is linked to increased risk of type II diabetes and cardiovascular disease. Highly digestible foods also have little effect on satiety and energy levels in the hours after eating, which can result in increased snacking and over-eating.

But not all starch is digested rapidly. Depending on its molecular structure, how it is processed and the food matrix, starch can also be classified as resistant or as slowly digested starch. This determines the overall impact on health.

EFSA has authorised a health claim that may be used on food where the digestible carbohydrates provide at least 60 % of the total energy and where at least 55 % of those carbohydrates is digestible starch, of which at least 40 % is SDS. Consumption of these products may contribute to consumers’ health by reducing the post-prandial glycaemic responses.

The aim of this EIT Food project is to develop sustained energy release starchy to contribute to consumers’ health, whilst meeting consumer expectations for taste. The consortium combines the expertise of the Quadram Institute, a food and health research organisation from the UK, PepsiCo, one of the world’s leading food and beverage companies, and KU Leuven, one of the world’s top-ranked research led universities.

The consortium’s approach is to select starches from different botanical origins and then carefully optimise processing conditions such as milling of raw ingredients and cooking conditions to produce a wide range of products with carefully tailored slow starch digestion properties.

In the first year, the project has produced oat-based cookie prototypes that deliver a high level of slowly digestible starch. Now EIT Food has approved support for the second year of the project, where the team will develop oat-based drinkable and spoonable products, creating opportunities for a new class of breakfast products with the added benefits of sustained energy release. 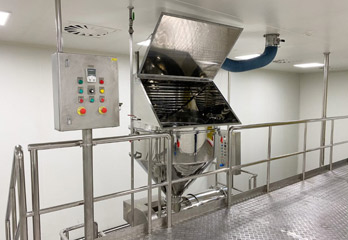